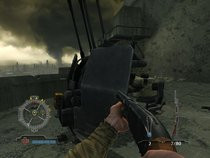 - Players can select "Remember Me" which will remember the user's Password and UserName.
- Players can now set a clan tag that will prefix every instance of the player's name.
- Players can set an alias that will be display instead of the player's Username.
- Games can be created by a dedicated server without a player cap.
- All in-game screens will show 24 players correctly.
- Market Garden map is playable in all modes.
- Factory map is playable in all modes.
- Added more spawn points and second tier spawn points to prevent spawn camping.
- Player ping times now show up on the scoreboard.
- Server name now shows up on the scoreboard.
- Increased chat text time on screen.
- Moved the chat text up above the compass.
- "Say" text is now white and "TeamSay" text is now yellow.
- Removed auto taunts when a player dies.